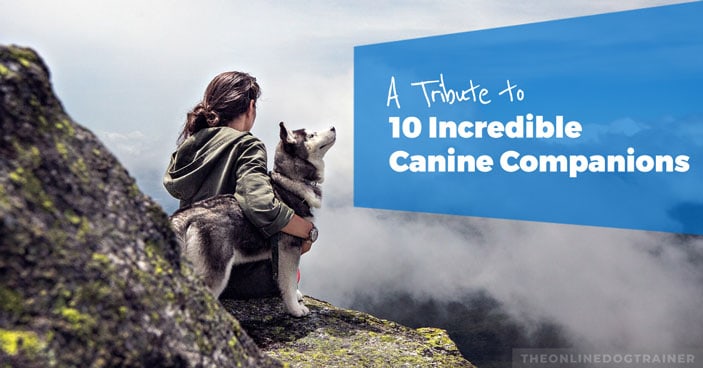 “Dogs’ lives are too short. Their only fault, really.” ― Agnes Sligh Turnbull

This quote from Agnes Turnbull couldn’t be more true.

When a special dog comes into your life, something magical happens and you forge a bond with your pup that can never be broken—even long after your beloved pup leaves this earth.

From providing us with endless cuddles, keeping us safe as service dogs, protecting us, and simply being loyal companions, the love of a dog is unrivaled.

For this reason, we owe a lot to our fuzzy friends.

So today, in honor of all the amazing dog’s around the world that have moved on—and to celebrate National Dog Week this month— I wanted to put together a special tribute to 10 amazing dog’s throughout history

It’s my hope that this post will allow you to reflect on all the wonderful things dogs are capable of, as well as help you celebrate the dogs (alive or deceased) that you have in your life. 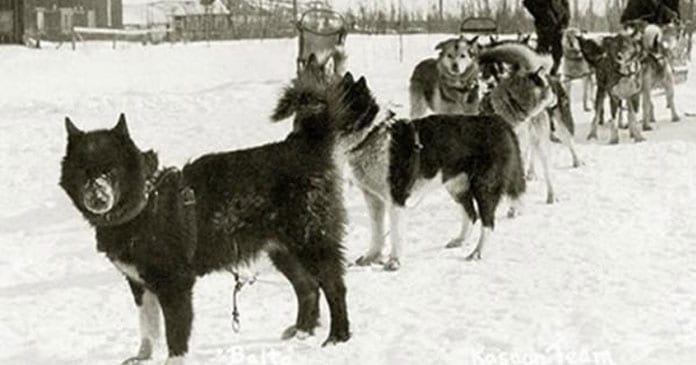 Balto was a Siberian husky who worked as a sled dog.

He was a brave pup that led his team on the final leg of the 1925 serum run to Nome where people were dying from an illness called diphtheria.

The only thing that could save people was an antitoxin that was transported from Anchorage, Alaska, then carried by dog sled to the people who lived in Nome.

The reason Balto is a hero: Balto proved himself on the Iditarod trail after saving his team in the Topkok River. In whiteout conditions he was able to stay on the correct trail path and safely navigated his handler and the rest of the sled team to Nome to deliver the precious medication that saved thousands of lives.

Bretagne was a beautiful golden retriever who served during the 9/11 attacks.

She helped save countless lives during the attack and continued her career serving with her handler until she was 16 years old.

Sadly, she had to be put down at age 16 when she stopped eating due to old age and illness.

Watch the heartwarming video below to learn more about her story and see how she was honored for her amazing service. 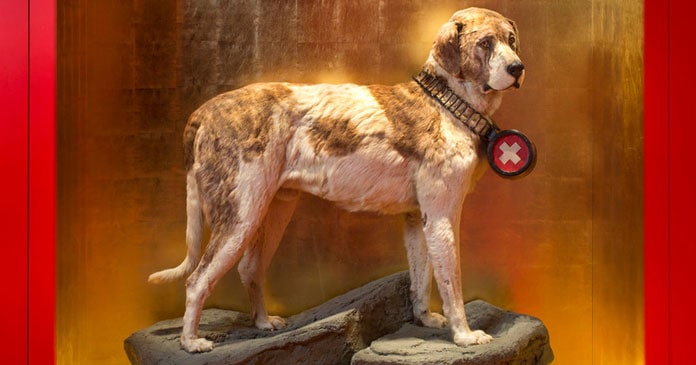 Barry, a beautiful St. Bernard, worked as a mountain rescue dog in Switzerland for the Great St Bernard Hospice.

His job was to rescue people in the mountainside who occasionally got buried in the snow due to unexpected avalanches.

Over the course of his lifetime, he was credited with saving the lives of more than forty people who would have frozen to death. 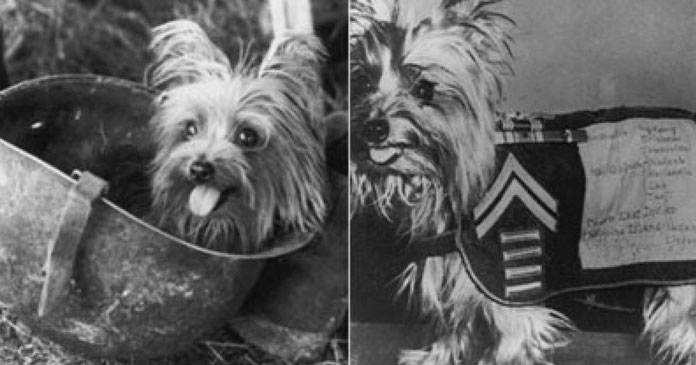 Smoky was a Yorkshire Terrier who served in World War II.

During her time in service, Smoky served in the South Pacific with the 5th Air Force, 26th Photo Recon Squadron and flew 12 air/sea rescue and photo reconnaissance missions.

Wynne (Smoky’s owner) believes Smoky saved his life by warning him about incoming shells on a transport ship.

According to Wynne, Smoky helped him duck below the fire that hit eight men standing next to him.

Watch her touching tribute below… 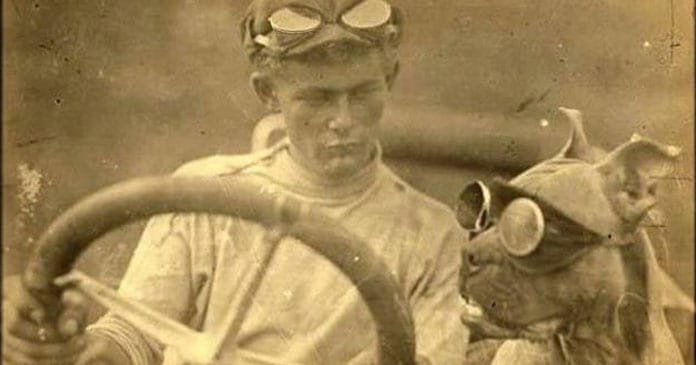 In 1903, Dr. Horatio Nelson Jackson, decided that he and his dog, a pit bull named Bud, would be the first duo to cross the United States by car.

During the treacherous trip, Bud sported his famous dog goggles and faithfully kept his owner company on the long open road.

On July 26, 1902—over 60 days after they started their journey from Cali— Dr. Horatio and Bud arrived in New York safe and well. 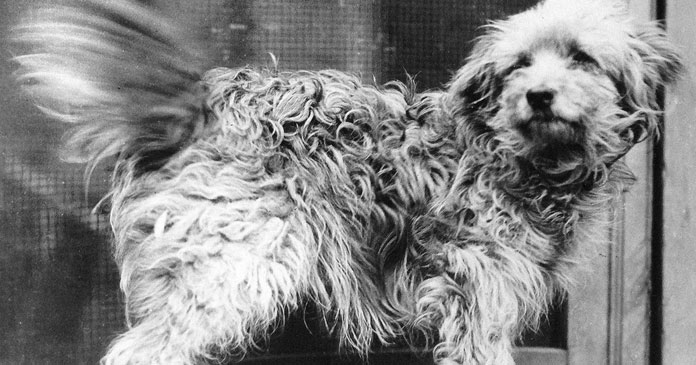 Rags was a mixed breed terrier who served as the U.S.’s 1st Infantry Division’s dog-mascot during World War I.

His job was to run messages between the rear headquarters and the front lines. This allowed him to provide the servicemen with early warning of incoming shells.

While all his work was heroic, he is most known for saving countless lives in the Meuse-Argonne Campaign when he delivered a vital message across the battle field despite being bombed, gassed and partially blinded. 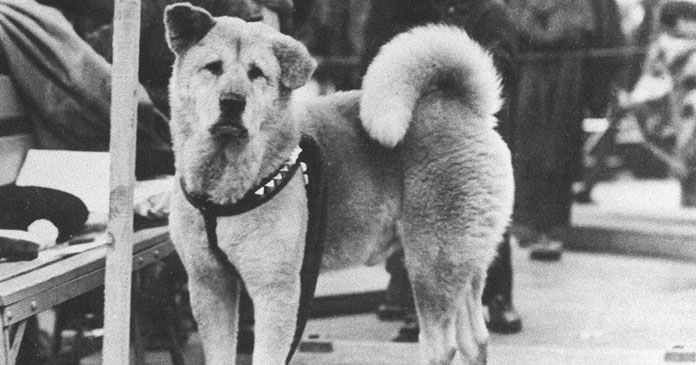 Hachikō was an Akita who lived in Japan.

In 1924, a man by the name of Hidesaburō Ueno adopted Hachikō. Every day after Hidesaburō Ueno came home from work, Hachikō would wait for him and greet him at the nearby Shibuya Station.

After Hidesaburō Ueno died, Hachikō continued to wait for him at the train station every day for 9 years.

Check out this touching tribute video dedicated to the loyal dog… 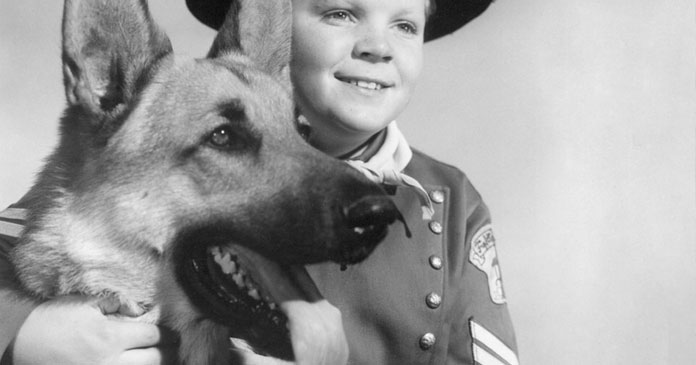 Rin-Tin-Tin was a German shepherd who was rescued from a French battlefield during World War I by a soldier named Lee Duncan.

After returning from battle, Lee Duncan trained Rin Tin Tin to perform small roles in silent films. In 1929, Rin-Tin-Tin managed to snag a starring role in the 1923 film Where the North Begins.

Why this is important…

The film Rin-Tin-Tin was in was a huge success and is thought to be what saved Warner Bros. from filing for bankruptcy.

Rin-Tin-Tin went on to star in 27 films. 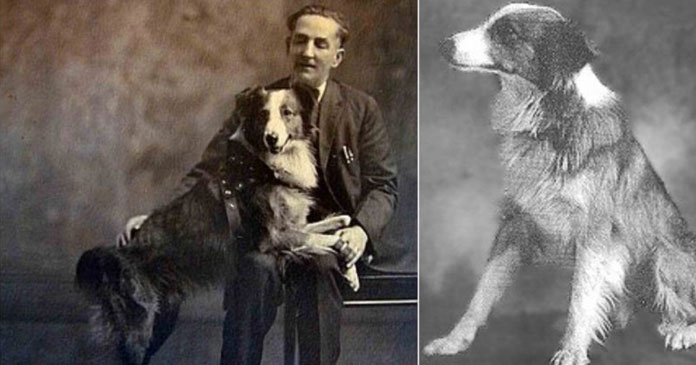 When Bobbie the dog was 2 years old, he became separated from his family while on a road trip.

The family sadly thought he was lost forever and had to return home without him.

Shockingly, 6 months later, Bobbie turned up at the family’s doorstep. In order to find his family, he traveled 2,551 miles!

It’s not certain how Bobbie achieved this…however one thing is for certain…that’s an incredibly loyal dog!

My final tribute goes out to my own beloved dog Peanut.

Peanut came to my wife and me as a 10-week-old puppy. And, from the moment we got her, it was clear that she was special.

She was so special, in fact, that Peanut was actually the one who finally got me out of the corporate world and motivated me to become a dog trainer.

She also inspired the membership site of the Online Dog Trainer and was the inspiration behind my book What the Dogs Taught Me About Being a Parent.

Don’t forget to enjoy every second you’ve got with your dog!