According to the Centers for Disease Control and Prevention, approximately 4.7 million dog bites occur in the United States each year.

According to these statistics, 1 out of every 69 people in the US has been bitten by a dog at least once in his or her life.

It’s likely that these statistics are shocking to you—especially if you own a laid-back, family-friendly dog who likes nothing more than to have his belly rubbed by strangers.

Yet, any time you’re around an animal—whether it be your happy-go-lucky Labrador Retriever or your neighbor’s yappy Chihuahua—there’s the potential for an unexpected accident to happen.

As humans, we tend to blame the animal for any bite or scratch we may encounter. And sometimes—due to age, illness, or instinct—a dog may be completely at fault for an injury.

However, it usually takes two to tango.

And as a dog trainer, I know that there are hundreds, probably thousands, of dog attacks that never would have taken place if the humans involved in the accident knew how to handle the situation or read the warning signs sooner.

For that reason, I want to discuss a few safety tips specifically regarding what you should do if you ever find yourself in the path of an aggressive dog.

It’s my hope that you can use these skills to keep both yourself, and the dog at play, safe.

Here’s what you need to know…

Tip #1 – Avoid Confrontation at All Costs

Imagine you’re walking down the street and, just down the road, you see a gang of rough-and-tumble men looking for a fight.

Unless you’re Chuck Norris, it’s unlikely you’re going to continue to walk down the street and put yourself in the middle of an unwanted situation.

The same logic should be applied if you come across an aggressive dog or a dog that intimidates you.

If you are far enough away from the animal, reconsider your route, and do your best to put as much distance between yourself and the dog as possible.

If you’re close to the dog, avoid eye contact, and mind your own business.

Eye contact can be seen as a threat and can often cause a dog to become aggressive as he feels the need to prove his dominance.

And, of course, it’s important to refocus your energy.

If you’re not looking for a fight and don’t put that kind of energy out there, you generally won’t get a fight.

Remember, dogs are very keen on picking up on your energy.

Remain claim, avoid eye contact, and make it clear that you have no desire to intrude on the dog’s territory; and he will likely leave you alone.

While not being confrontational is the best choice, you may find yourself in a situation where you have no other option but to stand your ground.

If you are certain that a dog coming toward you is going to keep moving near you and if this is the only choice you have, remember that confidence is key.

You need to do whatever you can to make the dog you’ve encountered think that you are bigger, stronger, and fiercer than he is.

For instance, clapping and making a lot of noise while staring at the dog might actually scare him.

To illustrate this point, check out this cool video below on how 3 men are able to scare off a pack of lions and steal their meat.

(Of course, I NEVER advise you to try anything like this. However, it’s amazing to watch how 3 guys can use body language to take nearly an entire antelope off a pack of lions.)

Note: If you fast forward to 2 minutes and 45 seconds, the narrator will discuss the importance of confidence in situations like this.

The bottom line is that if you have no other choice, you’ve got to do everything in your power to prove you are not intimidated and are the more powerful “animal” in the situation.

Tip #3 – Use Things around You for Protection

If you feel a dog is about to lunge at you, use objects around you for protection.

For example, if you are wearing a backpack, take it off, and use it as a “shield.” A dog is way more likely to bite a bag you hold out to block with than you.

If you’re outside, grab a big stick. More than likely the dog will choose to latch on to the stick instead of your arm or leg.

Use a metal trash can as a barricade…

Or climb a tree.

Use everything you can at your disposal to redirect a dog’s bite.

Most dogs aren’t aggressive for the sake of being mean or nasty.

In fact, an aggressive dog typically has an obvious reason as to why he’s acting in a defensive manner.

Think for a moment…are you trespassing on that dog’s property? Or might you be near something he’s trying to protect, such as a bone or puppies?

If this is the case, backing away from the dog slowly and picking a new path to take might be the solution to avoiding a dog attack.

Or maybe the dog you’ve come across is hungry.

Once again, this is a very logical reason a dog might be aggressive toward you.

If you have any snacks in your backpack or purse, it might make sense to throw them for the dog in order to put space between the both of you.

If this is the reason the dog is being aggressive, he will be much more likely to go after the food than you.

It’s not always easy to approach this type of situation in a calm manner. But if you’re able to take a minute to think about the reason behind why a dog might be aggressively approaching you, you might be able to find a solution to the problem that doesn’t end in violence.

Tip #5 – Be Prepared to Fight for Your Life

As a dog lover, I would never recommend that hurting an animal is the solution to any problem.

That being said, there are incredibly rare circumstances where you need to be prepared to fight back in order to save your life or a child’s life.

If you’re being attacked by a dog, it’s vital that you fight back.

You can do this in several ways.

The first option is to physically fight back by holding the dog’s mouth away from you.

Do your best to use your body weight to secure the dog so he is unable to harm you until you’re able to get yourself to safety.

A dog’s ears and nose are very sensitive. If you’ve been bitten or a dog has bitten down on you (or a child) and won’t let go, pinch the dog’s nose. This will usually elicit a response for the dog to let go.

Second, if you live in an area where there are a lot of stray dogs roaming around, it’s a good idea to carry some form of pepper spray when you are out. The same type can be used on both humans and animals.

I prefer this option because it’s a more humane way to ensure the dog you come in contact with doesn’t get seriously injured.

Because dogs have such sensitive noses, I can almost guarantee that an aggressive dog would be turned off by the use of such a spray.

Last but not least, carry a high-pitched whistle that dogs don’t care for.

If you’ve got a dog moving toward you, a few blows into your dog whistle is often enough to discourage a dog from continuing to attack. Problem solved!

At the end of the day, it’s important to understand that dogs can be unpredictable and that it’s always vital to exercise caution when encountering a dog you don’t know.

While I hope these few tips I’ve shared would be useful in the event of an emergency, I can’t guarantee that they will always be 100% effective all the time.

The best way to ensure your safety is to always be prepared for an emergency and take practical steps to protect yourself, such as…

Most important, if you have a dog that has aggressive tendencies, it’s your responsibility to…

While the chances of you encountering an aggressive dog are pretty slim, I want you to be prepared for any situation you might come across.

For that reason, I’ve developed a FREE guide that will help you identify whether a dog you’re around is aggressive or not.

To learn more about a dog’s body language and how you can ensure you don’t provoke a grumpy dog,… 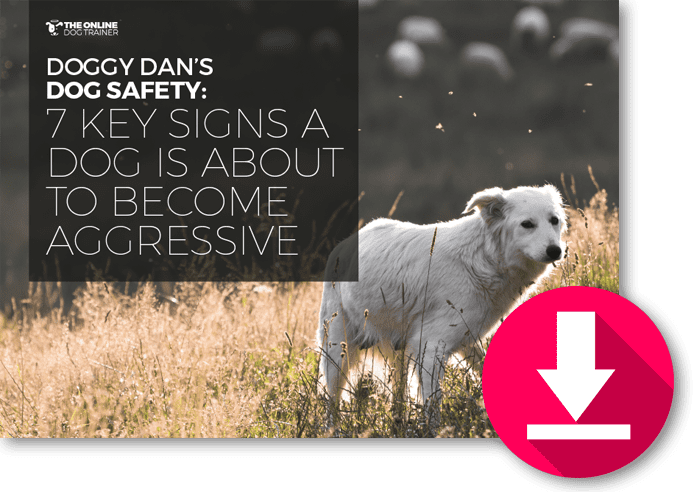 The post Dog Safety: What to Do If You Encounter an Aggressive Dog appeared first on The Online Dog Trainer.