April 15th marked 108 years since the famed “unsinkable ship” sunk to the ocean floor on its maiden voyage to America. But, did you know there were at least 12 dogs aboard the Titanic?

It is suspected that many more dogs were on board that day, but because they were listed as cargo in the ship’s records, most details have been lost. It has been said that Titanic had excellent kennel facilities, even planning a dog show for April 15th, 1912, the very day that the ship disappeared below the ocean’s surface in the very early morning hours.

While the world is remembering the tragic events of April 14th and 15th, we’re taking a moment to honor and remember the dogs of the Titanic.

As reported by Examiner.com, of the 12 confirmed dogs on the Titanic, only 3 survived the shipwreck – all of which were small dogs, 2 Pomeranian and 1 Pekingese, easily hidden inside a blanket or coat and carried into the limited space on lifeboats.

One Pomeranian named Lady, who was bought by Miss Margaret Hays while in Paris, shared the cabin with and was wrapped in a blanket by Miss Hays when the order was given to evacuate.

The Rothschilds owned the second surviving Pomeranian, and the Pekingese, named Sun Yat-Sen, was brought on board by the Harpers of the N.Y. publishing firm, Harper & Row. 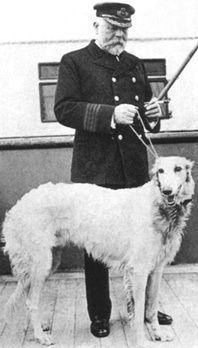 Captain Smith on Titanic’s deck with a dog, possibly his own.

The ship’s captain, Capt. Smith, has been seen photographed on board Titanic with his dog, a large Russian Wolfhound named Ben. However, Ben only spent one night on the ship, before it left the dock, and was returned home to Capt. Smith’s daughter.

In a particularly touching account, one passenger, 50-year old Ann Elizabeth Isham, was said to have visited her Great Dane in the ship’s kennels daily. At one point, Isham was seated in a life boat, but when told that her dog was too large to join her, she exited the boat. Her body was found several days later, clutching onto her dog in the icy waters.

Only first class passengers were permitted to bring dogs on board the ship. A few of those passengers were, Helen Bishop and her Toy Poodle named Frou-Frou, millionaire John Jacob Astor and his Airedale named Kitty, Robert Daniel and his French Bulldog, Gamin de Pycombe, William Carter and his family brought along two dogs – a King Charles Spaniel and an Airedale, Harry Anderson was joined by his Chow-Chow (aptly named Chow-Chow), and many other 4-legged passengers who remain unknown, including a Fox Terrier named simply, Dog. 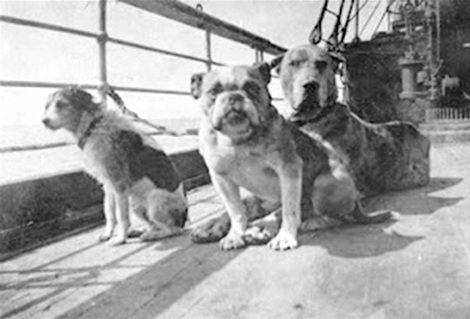 A photo of dogs on the Titanic. A dozen dogs were confirmed to be aboard; three small dogs survived. (Photo courtesy of Widener University)

Helen Bishop survived the Titanic, later reporting that her dog, Frou-Frou latched onto her dress with his teeth when she left him in their cabin. She reportedly said, “The loss of my little dog hurt me very much. I will never forget how he dragged on my clothes. He so wanted to accompany me.” 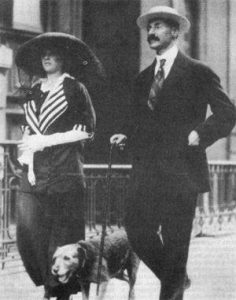 John Jacob Astor IV, his wife Madeleine, and their dog, Kitty, about to board the fated ship. John and Kitty did not survive. (via Cheddarbay.com)

In a fortunate turn of events, one passenger, Charles Moore of Washington, DC, had planned to transport up to 100 English Foxhounds via the Titanic, but made arrangements on a different vessel at the last minute. Two other dogs avoided disaster when they disembarked with their owners at Cherbourg, the ship’s first stop after leaving Southampton.

Ships have kept cats on board dating back to ancient times. Mostly for their ability to catch mice and rats, but also to provide companionship and camaraderie for sailors away from home for long periods of time. And yes, Titanic was no exception. She had a ship cat named Jenny. Read all about the Titanic’s ship-cat, Jenny, right here.

It’s hard to imagine being any part of this terrible tragedy, even harder to imagine having to make the decision to leave your dog when the ship began to sink… Would you have been able to do it?