Do you ever wonder why your dog’s nose is always running a mile a minute?

The answer is simple: A dog’s sense of smell is his most powerful sense.

A dog can use his nose to sniff out food, his friends, and danger from miles away. So, even when we can’t smell anything around, it’s possible that your pup is in the middle of smelling something amazing!

While it’s common knowledge that dogs can smell really well, the science behind why they can smell for miles or what they use their sense of smell for isn’t always discussed.

Today, I thought it would be fun to talk about the science AND instinctual behavior behind why dogs are always smelling stuff.

But first let me point out that, if you’re struggling with a hyper-obsessive sniffer who can’t calm down and you haven’t put my foundation program The Dog Calming Code in place yet, then that is the first thing you should do after reading this.

It’s sure to be the simplest way to calm your dog’s obsessive sniffing!

Why Dogs Have an Incredible Sense of Smell

Dogs have relied on their noses for centuries to sniff out water, food, and predators.

Therefore, from a biological standpoint, it makes sense that a dog’s nose would be designed to be far more powerful than a human nose.

But, how much more powerful?

The Marcach Road Animal Hospital tells us that…

“While humans possess only about 6 million smell receptors, our canine friends can have up to 300 million. But, that’s not the only difference. The part of the brain dedicated to processing smells is also 40 percent larger in a canine than in a human brain.”

That’s not the only unique thing about a dog’s nose though.

Many people don’t know that dogs actually have an extra organ that humans don’t.

“The Jacobson’s organ is located at the bottom of the dog’s nasal passage and allows dogs to pick up on pheromones—important chemical cues all animals produce that signal messages to one another, like mating readiness.”

The Jacobson’s organ is also important for dogs recognizing the scent of other dogs in their pack or puppies locating a nipple to nurse. If a dog is trying to get more scent to his Jacobson’s organ, he may pull back his upper lip and rear back his head — called the “flehmen” reaction.”

How Dogs Use Their Noses

By now you understand the science behind why dogs can smell so well—and for good reason.

Without a powerful nose, it would be hard for dogs to find meals and protect themselves in the wild.

That being said, most pet dogs don’t need to resort to using their nose to sniff out their next meal.

For that reason, we thought it would be fun to take a look at how dogs use their nose and explain why dogs seem to enjoy smelling funny things like trash and butts.

Let’s start with a common one that grosses a lot of people out…butts.

As humans, a friendly handshake or a hug is the politest way to greet a new (or old) friend.

For a dog, the go-to “nice to meet you” greeting is butt sniffing.

As humans, we find this strange or amusing and often try to pull our dogs away from each other when this type of greeting occurs.

But, a formal butt sniffing is actually really important for dogs.

Mentalfloss.com tells us that…

“When one dog greets another with a nose in the derrière, it’s basically getting a brief biography of its new friend, written in scent molecules and pheromones.

It may seem like a strange way to go about it, but butt sniffing is just the canine version of shaking hands and introducing yourself.”

The next time you’re out and about with your dog and he tries to “greet” a friend, let him do so. It’s a very important part of a dog’s social greeting.

Why Dogs Love the Smell of Trash and Rotting Materials

Because a dog’s nose is so powerful, you’d think your canine companion would stay far away from odors such as trash or decomposing dead animals.

Yet, the exact opposite is true.

Just think about how many times your dog has gotten into your trash bin. Or, how many times Fido has stopped your walk in the park to roll over a dead frog or something else stinky.

So, why do dogs do this?

Psychology Today has some great insights as to why dogs do this. Here’s what they had to say…

“Since the wild ancestors of dogs were not only hunters but also scavengers, much of the stuff that they are rolling in could still possibly be edible.

The notion then is that the wild canine rolls in this material and then returns to the pack. The other members of his group immediately pick up this scent and know that there is something which can pass for food nearby.

Another theory suggests that the dog is not trying to pick up odors from the stinking mess it rolls in, but is actually trying to cover that smell with their own scent.
It is certainly true that dogs and wolves will often roll around on something, like a stick, a new dog bed or such, as if they were trying to deposit their scent on it.

We still don’t 100% know why this is true. But, I would imagine the behavior is derived from a handful of different safety or pack-related habits.

Why Dogs Are Constantly Smelling Their Owners

Last but not least, I want to talk about why your dog may often give you a sniff.

First and foremost, you’re a part of your dog’s pack. For this reason, it’s important that your dog has your scent in the event that something would happen to you.

Smell is very important for identification. In fact, a blind dog can easily identify who different people are through the sense of smell.

Aside from identification, we’ve discovered in the last few decades how much dogs use their sense of smell to gauge health.

For example, a dog can smell bacteria.

In the wild, dogs can tell who is healthy and who is unwell in the pack by simply sniffing each other.

This process helps with the pecking order as weaker, older, and sicker dogs are usually kept in the middle of the pack while in transit.

Today, we can use this powerful instinct to train dogs to sniff health issues in humans, such as…

Dogs are amazing animals, and with super-powered noses, they’ve been helping us save lives—whether it be in hospitals or on the battlefield—for many years.

The good news—we can use a dog’s sense of smell to help them enjoy life and relax too.

In fact, if you have a dog that’s always anxious or stressed out, essential oils can be used to help him safely and naturally relax and unwind.

(Just remember to check out my foundation programThe Dog Calming Code before you do anything else.)

So, if you’re interested in learning how to use smell to settle down an anxious or stressed-out dog, I encourage you to download my FREE guide to 3 Smells That Naturally Calm and Relax Dogs.

In this guide, I’ll share 3 essential oils that have been proven to calm dogs as well as info on how to safely diffuse these oils in your home.

You may also find the oils calm you down, which, in return, will relax your dog!

Get your FREE guide here! 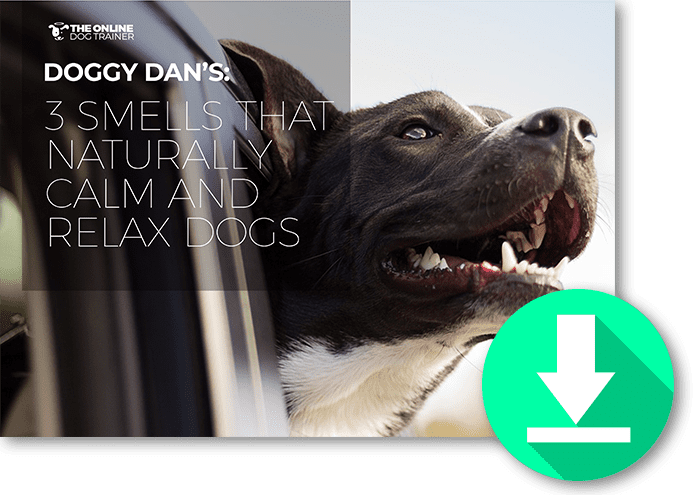 The post Why Does My Dog Sniff That? The Science Behind Your Dog’s Incredible Sense of Smell appeared first on The Online Dog Trainer.